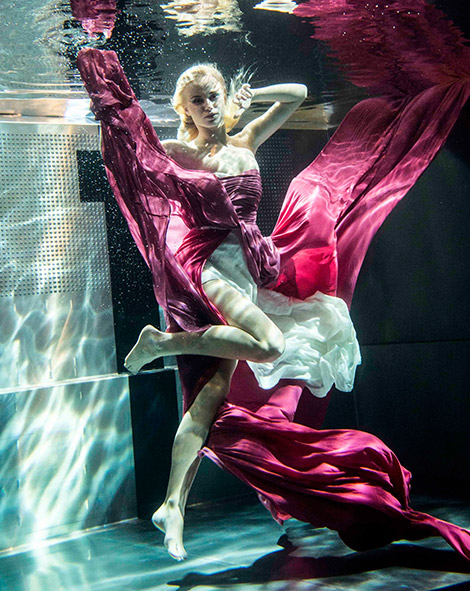 An exhibition of the Off Fashion Academy

Visit Galeria Echo on 27 October at 4.00 p.m. to see the opening of the exhibition of unusual underwater photos taken by Eye Lens – an exhibition of the Offashion Academy companions.

Underwater photography is so unique that it draws the attention of many people. The underwater world is so mysterious and peculiar people really want to know how things look under water. We are the ones who uncover a part of the mystery; we prove that fashion does not only stand for runways and shows because you can play with fashion in many ways. We walk off the beaten paths, we put a whole music band, a snowboard, or even a royal throne under water. We show a fairytale world to people who are unable to experience it themselves. We will stop the time and expand the perception of photography. Our exhibition will show people that apart from our world, there is also the underwater world, which is interesting, intriguing and completely different from our everyday surroundings.

The EyeLens Underwater group was established in 2015. Its core is composed of photographers Dawid Donabidowicz and Karol Kubicki. As they claim themselves: “After the first attempt of taking underwater photos, we knew that it was the thing we wanted to do in our life.” The group collaborates with the best underwater female models, the best visage consultants and designers. They have already performed several dozens of photo sessions, among others, for fashion designers, clothing companies, MTV, organizers of the Świętokrzyskie Voivodeship Miss competition, and many other individuals who wanted to try their hand at those unusual sessions.

Dawid Donabidowicz has been engaged in photography since high school. In the beginning, he dealt with reportage photography when he worked for the local media. When he acquired a degree in journalism, he opened a photo studio that has been operating till this very day.

The interests of Karol Kubicki in photography started a bit later. He immediately started to have affection for portraits, both those on the surface as well as under water. He has had many publications in industry fashion magazines.

Another achievement of the EyeLens Underwater group was the publication in the “Foto Kurier” magazine (10/2017), including the cover of that issue.